"Being together is like catching a sunbeam; each new memory we make reflects light hinting there is more to see and know."

The week before general conference, my friend James Vergara, realizing I was a lone man in the wilderness with Diane in the states, invited me over to his home in between conference sessions on Saturday.  I took a bus out to Musa where he lived and was surprised to learn that they had planned to cook sushi for me.  Wow was it good.  I have never had sushi that good, so fresh, different, and plentiful.  I never would have guessed they would have fed me sushi.  Their daughter had learned how to make it from her brother who is living in Provo.  I loved, loved, loved it and then enjoyed the Saturday afternoon of conference with them.  It was nice to not have to be by myself for the weekend, very kind of this dear brother and his family. 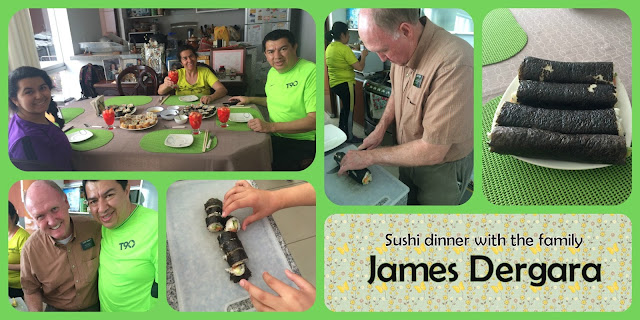 Here are some weird things we find in Peru: 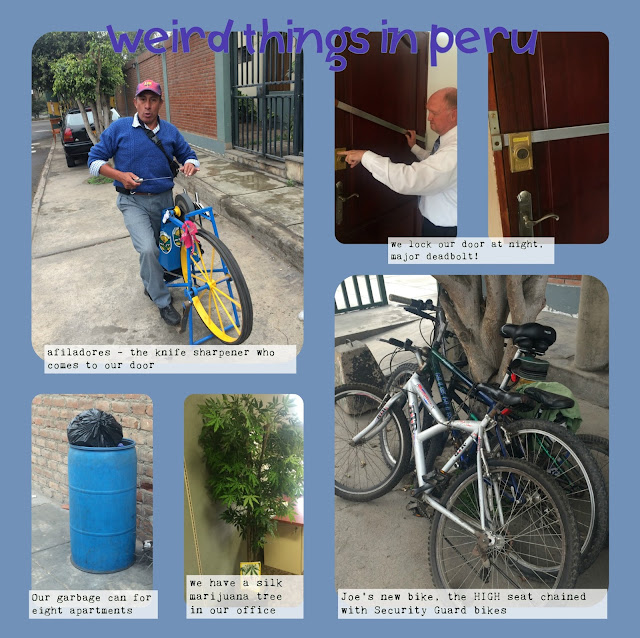 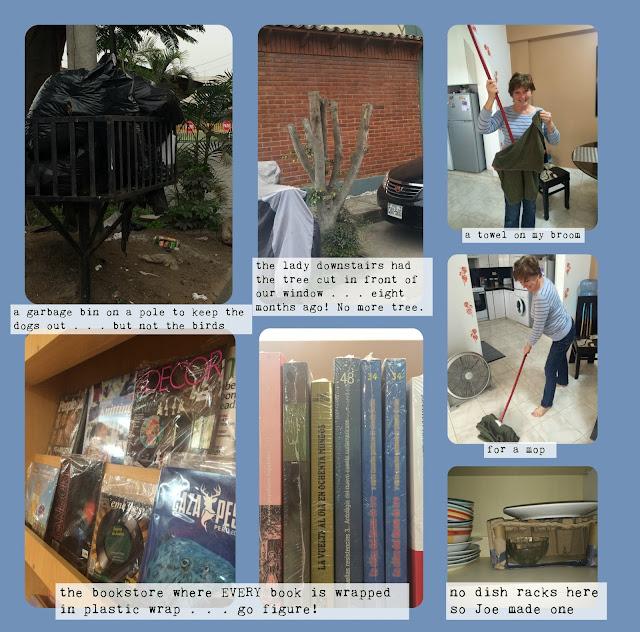 Joe and I sang in the stake choir today for the opening of our regional conference video broadcast. We got a few of the other missionaries to join us, one of which has been a member of the Tabernacle Choir. He had a beautiful base voice behind me. It was quite a challenge to read the notes, read the Spanish words and pronounce the words correctly all at the same time. But I learned well and it was pretty fun to have that experience. One song was “Hark, All Ye Nations” and the other “Let Us All Press On,” both of which were perfect to sing as missionaries. The other members of the choir loved the Americans joining them.

A few weeks have been missed because Diane was in Utah helping her daughter and a new granddaughter, Adalinn Rose. That's the first time we've been apart for so long so it was nice to get back together and back to a routine.

We also visited the Pucllana Huanca ruins and had an hour tour of the grounds. The ruins are made of small adobe bricks by the thousands and have only recently been excavated, maybe the last 10 years. The temple is only half uncovered from the mounds of rock and dirt that cover it. We were told that some 15 years ago, it was a popular place for dirt bikes riding over the mounds. It is interesting to note that although the temple is very large, there are no rooms inside, no tunnels, secret chambers or tombs. It is simply raised holy ground for ritual offerings, sacrifice, feasting and prayers. 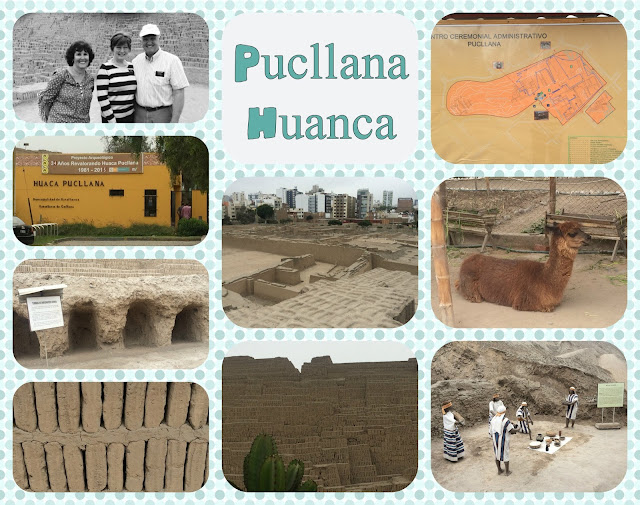 Explanation of pictures: 1st column (1)We met Paula on the tour. She is LDS and travels by herself because her husband doesn't like to travel. (2)Just a small museum on the premise. (3)These were burial places where there were always three individuals, man, woman and baby. They sacrificed a baby because they believed they were the closest to the afterlife to guide them back. (4)Notice the space in between the bricks. This was on purpose to allow for seismic activity which happens a lot in Peru. 2nd column (1)The huanca or temple site is right in the middle of the city. (2)the magnitude of the temple is shown here. 3rd column (1)the map shows how much is still not excavated, the section to the left. (2)figures showing how offerings were made. 1st column (1)a walkway through the maze. (2)these are the colors used around the temple. (3)excavation still going on one wheelbarrow at a time. 2nd column (1)the adobe bricks were made by hand in a bin like this where water was added to the mud. (2)this platform is at the top of the temple. The poles held up the roof where offerings were made. (3)Peruvian hairless dog is a breed of dog dating back to pre-Inca cultures. They are very expensive. 3rd column (2)look carefully to see the line of where the excavation ends and how much dirt needs to be removed covering the remaining temple. 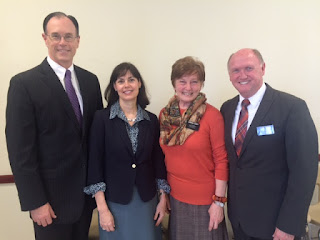 Elder Waddell has been a counselor in the Area Presidency here in Lima but he was called to serve as a counselor in the Presiding Bishopric last week. He is featured on the LDS website. That means he will be moving back to Salt Lake and we will have another brother serving in his place. Elder Waddell has been the Audit Committee Chair and we reported to him directly having a formal meeting with him once a month with other members of the committee. We will miss him and his sweet wife Carol.

We had a special missionary experience this past week.  It began with the taxi ride to the airport. The following is from Joe's journal:    I want to talk about the missionary experience I have been having.  It began with my ride to the airport to pick up Diane.  The Taxi driver, Carlos, began talking with me.  So it’s his fault.  We talked about everything and he was genuinely interested in the Church and the Joseph Smith Story, in tithing, in prayer, and eternal families.  We talked all the way to the airport and all the way home.  He told us of an experience he had which was similar to that of Joseph Smith in that he was needing comfort or answers and he knew when they came after praying for a long time.  That happened to him several times but the most evident was when his son, Sebastian, was diagnosed with Leukemia.  His wife had taken him to the hospital and the prognosis was not good.  All Carlos could do was go home, a ways from the hospital, and pray with his other three children.  He prayed long and hard and then by himself, day after day, and at work.  After several weeks, the doctors suddenly found that all their son’s test were negative.  They couldn’t believe it but Carlos attributes it to the prayers in behalf of his son.  He was very touched and since that time prayer has been vital to him.  As he dropped us off at our apartment I felt a strong impression and connection to get his address and phone number.  I told him I wanted to bring a Book of Mormon to him.  He gave me his info and we embraced.  He is 43 years old has a wife and four children (daughter 20, Carlos Benedi, Sabastian, and Fernando).  Yesterday I mentioned him to Miguel (counselor in the mission presidency and fellow worker in the office) and told him I wanted to take a Book of Mormon to him.   He lives about 20 minutes from our area.  I decided to call him from the office and we decided to meet today at 3:00.  Miguel contacted the Sister missionaries and then took me to Carlos's house today.  We were able to meet with this dear family.  They have lots of questions but Carlos is the one who is leading out.  He is so desirous that his family come to Christ.  He has been praying for something,  Today one of the Sisters told me it was a “miracle” this had dropped into their laps.  They have been struggling to find investigators.  I was touched and felt very tender.  The Lord certainly does know the hearts of his children and is in the details and puts others at cross roads.  Carlos took me home after the discussion with the Sisters.  He told me he was so anxious and fearful for his family.  I told him the Lord knew and was very aware of his family and promised him, if he led the way with patience and love, the Lord would watch over his family and would bring peace into his home.  This was, indeed a very special experience for me and one I am thankful to be a part of.  Carlos will be attending Church on Sunday.  I will be watching with prayer and interest.... Today is Monday and from the Church Office I phoned the Sisters to see how yesterday went.  They were very excited.  Carlos did not go to church but his three boys did and they loved it.  The Sisters had a discussion after Church with the family and Sister Reyes said it went very well with a very sweet and tender experience.  The Lord is indeed in the details of our lives.

Each week Joe teaches two language classes in Spanish and in English.  The only day he has off is Wed.  Friday he decided to combine the classes for a "conversation Friday".  We spent half the class with the English class speaking English to the missionaries and the other half of the class, the speaking Spanish to the office workers.  It was a wonderful experience.  Everyone was communi-cating and now when they walk the hallways they know each other.  It was a marvelous class.

After Diane spent three weeks in the States, together, we have come to realize Peru is home. For several months after arriving here, it was always "Lima" rather than "home". We love our mission, we love the people we serve and work with, we really enjoy the food and we look forward to another year full of surprises and experiences.
No comments: